What Are the Hindu Epics,

What are the Hindu Epics?

When were they written and by whom? Are they true?

Why are they important to know about?

What are some of the most essential teachings from these works?

How might I usefully incorporate this into my practice, my teaching, my life?

What Are the Hindu Epics?

First of all, the Hindu Epics are cool.  When I first got into yoga in the summer of ’96, my friend and yoga mentor got me to read both the Ramayana and Mahabharata.  Here are the versions by C. Ragagopalachari that I read at that time:

I loved these books!  Here’s what they did for me: They showed me that there are certain truths, values, and virtues that are Universal and have been so in all times and cultures.  This is why the real, original name for what we now refer to as Hinduism is what the “Hindus” refer to as Sanatana Dharma (Universal Righteousness/Eternal Religion).  In short, I understood the Epics to be works of deep wisdom with profound messages for all of humankind

The Epics also gave me a lot more understanding and faith in what I was doing. What was I doing?  Well, for one thing, my friend had me chanting this long Hindi poem called the Hanuman Chalisa (“Forty Verses in Praise of Hanuman”), the so-called “monkey god.”   I loved singing these verses, and yet there was a part of me (was it that part who had just been living as an Orthodox Jew for the 3 years previously?) that didn’t exactly feel comfortable chanting about the greatness of a monkey, however godlike or amazing he was, let alone bow down to my teacher who the supposed incarnation of this monkey(!)  Then I read the Ramayana and I felt that much better about Hanuman because I saw how he really is an embodiment or symbol of Bhakti, of pure love and devotion.  So when I sing in praise of Hanuman, I am really just signifying to the Universe (or Source/God/Higher Self, etc.), that I hold this ideal and feel so strongly about it that I will sing it into existence – sing so that it gets down to the core of me and awakens parts of me that are still sleeping.   That deepest part of me which is pure love and devotion, beyond all ego.

Then I read the Mahabharata and the exploits of Arjuna, the Great Warrior Prince, and Krishna, also a prince, but really God incarnate on earth (a blue godman, and this was way before the movie “Avatar” : ).  The Mahabharata (which could be translated as “The Great Indian Epic”) is a vast compendium of legend, lore, law, and moral teachings from ancient India.  It is so well-loved and influential even to this day in India that when it first premiered on Indian television, the country basically shut down in order to watch it!  The most well-known part of the Mahabharata is just a small little piece of it called the Bhagavad Gita, which we will be discussing in the section after this one.  With just 700 verses and in 18 short chapters, the Bhagavad Gita reveals some of the deepest teaching of spirituality ever set down on paper.   Like, what does a real yogi look like?  And how do we get to that place of true yoga?  And you know, if the Bhagavad Gita is that timeless and worth reading, don’t you think the rest of the Mahabharata might also be worth looking into?  Yes, maybe…just a bit? 😉

The Ramayana is one of the greatest love stories ever told.  It is not just about the love between Rama&Sita that causes Rama to go on an epic journey when Sita is abducted by the demon king, Ravanna.  But it’s also the story of Hanuman’s pure devotion (Bhakti) to Sita&Rama that made it possible for him to perform superhuman feats like leaping across the ocean in a single bound, uprooting an entire Himalayan mountain, and ultimately helping to vanquish the demon king’s army.  The story also brings up rather deep issues of love and dharma (righteous action) that are still relevant today.   It’s definitely worth some of your time – or see the movie : )

Who Wrote the Epics?  Are They True?

To answer these questions, please first remember that we are almost always going to see a conflict on the level of form/appearance between what religion and science tell us.  For the Hindu (Sanatana Dharma) tradition, these stories really happened at specific times in the past – both Rama and Krishna really lived and these epic stories are more or less accurate accounts of what happened, with some creative license in order to make it into a juicier tale!  Science, on the other hand, will generally only accept what there is hard evidence for, and nothing less.  For them, we have no idea really if Rama and Krishna even  really lived, let alone did all of the things in the Epics, though there is some evidence that they lived at least.  When it comes to mythology, though, which is essentially what we’re talking about here, it really doesn’t matter if there’s one iota of hard, material evidence for the story.  It’s the deeper lessons that matter.  Consider this quote from Yogi Berra:

“Just because it never happened doesn’t mean it ain’t true.”

Actually, don’t think Yogi Berra really said that – but that don’t mean it ain’t true!   These things all resonate on a far deeper level than the part of us that wants to know if they are true.   But if you still want to know that, check out the Wikipedia articles!

Why Are the Epics Important?

The epics are important because they give us a really good idea of what life in ancient India was like, and the cultural milieu (environment) from which arose the teachings of yoga that we now know and love.  As I said before, they were really eye and heart-opening reads for me when I was first getting into yoga, and they helped to inform my practice at a much deeper level.  Now I saw myself as heir to this truly brilliant tradition that contained these fantastic moral-spiritual tales to drive home deeper lessons of life.   Lessons of Karma and Bhakti Yoga – love, devotion, surrender, dharmic-living (righteousness), etc., to inspire us on the spiritual path.

What was also fascinating to me was to understand that in this tradition, Hanuman is viewed as an incarnation of Shiva.  Why is this important?  Well, as we will see, Shiva is understood to be the gifter of the traditions of Tantra and Hatha Yoga to humanity.  So when we practice yoga today, there is a sense in which we really do want to be aware of who Shiva and Hanuman are, because awareness of them will at the very least help to inform our yoga practice, right?  Also, what this story is teaching us, too, is that even the gods serve one another.  In this case, Shiva (as Hanuman), serves Vishnu (Rama) and Lakshmi (Sita).   This is to help us get beyond sectarian differences.

This was all brought home to me even more as I early on connected with two teachers who were said to be incarnations of Hanuman – Neem Karoli Baba, and Dhyanyogi Madhusudhandasji.  In this tradition, it is indeed possible for a great teacher to be an Avatar (incarnation) of a great being from the past, like Hanuman, Krishna, Rama, Sita, Shiva…But more on this in the advanced course!

What Are Some of the Essential Teachings of these Works?

Actually, I won’t say much here because a lot of the teachings from these texts will come in later sections (in  the sections on the Bhagavad Gita, and the Mythology of Yoga), and there’s so much that could be shared.  I will say this right now, though: For me, it’s all about the triumph of good over evil.    It’s one reason why we love Hollywood films — because there’s almost always a happy ending.  The deeper meaning is this: No one and nothing is ever lost.  There is no idea of eternal hell or damnation in Hinduism.  Ultimately, we all get to go home ( or OM, if you prefer : ).  We might be lost for a long time – lifetimes even – yet in the end, the demons (inside of us) will be vanquished, and Cosmic Order (Dharma) restored.  Consider the words of Gandhi:

“When I despair, I remember that all through history the way of truth and love have always won. There have been tyrants and murderers, and for a time, they can seem invincible, but in the end, they always fall. Think of it–always.”

It might also be helpful to keep in mind when we’re reading epic tales like these – whether Hindu, Homer, or Hobbit J — that we ourselves are the hero of the story.  The story is our journey.

Their quest is our Quest! 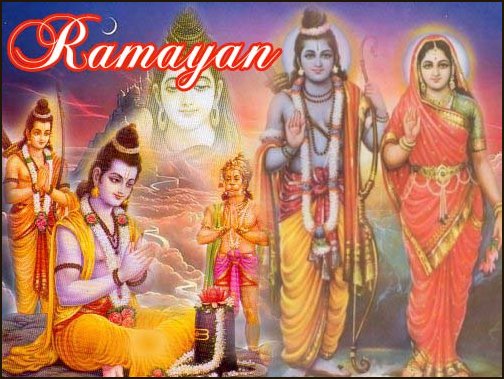 QuestEssential Lessons of this Session

~ The Mahabharata and the Ramayana are the two great Hindu Epics – ancient compendiums of legend, lore, law, and love that are windows into the soul of India and its greatest gift to humanity, the yoga tradition.

~ The ancient, original name for Hinduism is “Sanatana Dharma,” meaning something like “Eternal Righteousness,” or “Universal Religion.”  The Epics reflect this deep wisdom about life and humanity’s place in the Cosmos, as well as how to live righteously in the world, whether one is a renunciate (yogi) or a householder (with family).

~ The Mahabharata essentially relates the epic struggle and eventual war between two sides of the same family, the Pandavas and the Kauravas.   The greatest gem of the Mahabharata is the Bhagavad Gita, Krishna’s counsel to Arjuna in time of war, in which Krishna divulges the deeper and secret teachings of yoga to his eager and faithful student.

~ The Ramayana essentially relates the story of how Rama saves his wife and queen, Sita, from the hands of the demon king, Ravanna, enlisting the help of Hanuman and his monkey army to do so.  In the process, the story teaches the true meaning of Bhakti, the yoga of love and devotion.

1) Hanuman is often called “the monkey god,” but who was he really?

5)In your own words, why should we care about mythological stories – aren’t they just, well, myths?

6) Nilakantha in his commentary on the Mahabharata says:

What does this mean to you?

Sources & Resources to Further Thy Quest

Sita Sings the Blues – a must see!

“Rama and the Ramayana: Lessons in Dharma”

“The Central Philosophy of the Mahabharata”

What is Sanatana Dharma?

Quotes from the Mahabharata

Quotes from the Ramayana